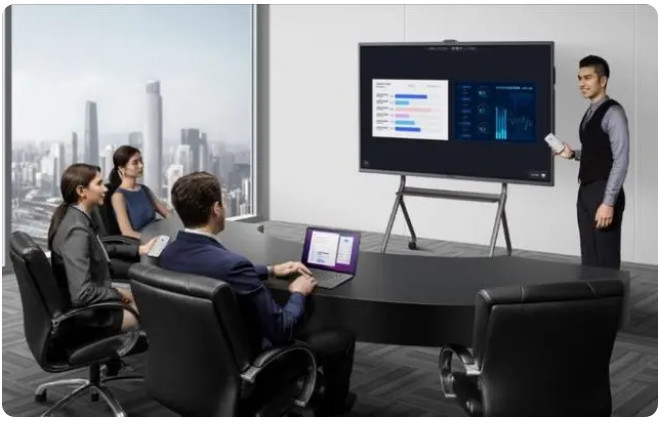 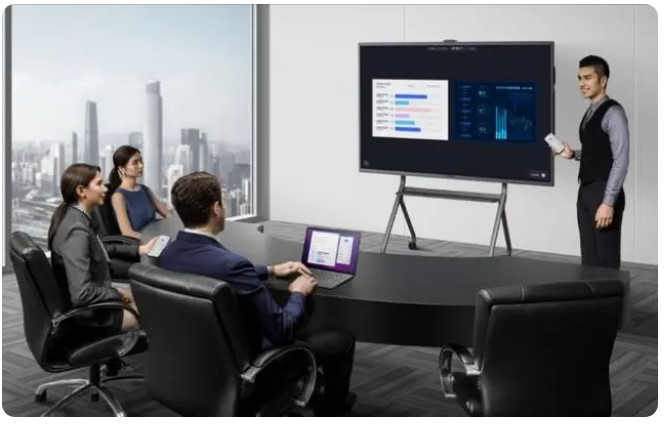 As MAXHUB has been deeply engaged in large screen video conference TV multimedia teaching tablet all-in-one machine and other businesses for many years, fully understood the meeting pain points of enterprise users, and constantly explored the needs of users, MAXHUB also has a very rich product line. For example, the large screen conference tablet all-in-one machine of the MAXHUB brand series is subdivided into cutting-edge, cutting-edge PRO version, classic version, advanced version, professional version, and technical version. The starting price of the technical version is also expensive due to too many new scientific and technological elements, I won't make an introduction for the moment.

The new model of large screen video conferencing TV all-in-one machine is defined by MAXHUB as the entry-level version, with advanced performance price ratio. The screen size range is 55 to 65 inches. The basic function package will include built-in cameras, omnidirectional voice pickup microphone, its own remote voice and video conferencing platform, meeting teaching screen sharing (also can be shared by a separate application window), wireless screen projection function, The reverse touch function (that is, the content that the computer projects to the smart screen can be directly touched on the conference tablet to operate the computer, without the need to operate locally on the computer, which can save trouble). The electronic whiteboard intelligent interaction and other functions are the basic functions of the large screen conference all-in-one machine; The new cutting-edge version is at least 800W high-definition camera, with four array microphones at a distance of up to 6m. It can automatically detect human voice for intelligent noise reduction adjustment of speech gain, effectively restore the original voice of real people, and the speaker's face intelligent tracking feature.

The cutting-edge PRO version video conference TV multimedia teaching tablet all-in-one machine can be described as a small upgrade version of the previous cutting-edge version. The video size range is expanded to 86 inch 4K ultra clear screen. In addition to the basic function package described by the cutting-edge version, the microphone is upgraded to a 6-array 8-meter polar microphone, with 11 million ultra clear cameras. Android 9.0 and windows10 dual systems are optional, equipped with I5 CPU, 8G operating memory and 128G storage memory.

It also includes the basic function package of the cutting-edge version, but the classic version, the advanced version and the professional version have been upgraded to the sixth generation. The video size of the sixth generation classic version has reached the maximum 98 inch 4K ultra clear screen, the screen frame fitting technology has achieved zero fitting process, and the screen color gamut is 90% high color gamut. What does that mean? The color quality of the displayed image is better and the color saturation is high. Compared with the real object, the image is more similar to the real object. The microphone is 8 arrays+the pickup distance is 8 meters. The speaker has been upgraded to add front slot sound, which makes the sound more three-dimensional, as if it were a cinema; The camera is upgraded to a 48 megapixel wide-angle camera with a wider viewing angle. Both support Android and Windows dual systems. The operating memory and storage space are increased to 16GB/256GB, and the supported external interfaces are rich.

The slogan of the advanced version is a new experience of intelligent conference, and other functions are the same as those of the classic version, because it can AI intelligent sound screen, customize the startup page, and support HDMI acquisition function. It does not need to install an additional acquisition card to collect terminal images input at the wired end. The WIFI module is pluggable, and supports Bluetooth 5.2 communication.

The professional version is defined as professional remote collaboration. The equipment used on audio and video equipment is stronger. The camera is a front dual camera, a 48 million pixel 92 degree super wide angle main camera. Compared with other versions, the vision is expanded to 37.3%. It is easy to adapt to large conference rooms, and all participants can see clearly from the opposite end, The other 8 million telephoto camera is mainly able to make some colleagues who sit far away can also be clearly shown in the video of the meeting and can track the image of the speaker.

Although the microphone is an 8-array microphone, the pickup distance is 12 meters (it's too far. I can hear your voice clearly when you speak at 12 meters in the video). Advanced AI algorithm is used to reduce noise (filtering more than 300 kinds of common noises, such as typing sound, screen writing sound, air conditioner wind vibration sound, etc.), and at the same time, the gain amplification of human voice can be processed, So you can hear your voice clearly when you are 12 meters away. The professional version is also very good at audio playback,

Unit 5 loud volume of 40W side sound makes the dialogue extremely transparent, as if you were in the scene. So this is the strength of the professional version.